We left London on Sunday evening to head to Reading, where our friends Charlie & Gareth live.  We were leaving for Germany on Tuesday evening which gave us a day and a half to relax and do nothing.  Except that Gareth had a little surprise for us.  He was already on Christmas Break and as such, was taking us to Winchester to check out their Christmas market.  He’d never been and he’d heard it was one of the best in the state.  Lee and I had never been to Winchester, so it seemed like a no-brainer to check it out.

Winchester was absolutely beautiful.  And old.  You see, Winchester has been an inhabited town since about 150 BC and was the capital of England during the reign of King Alfred (871-899 AD), so yeah.  It’s ancient.  We stayed mainly in the city center, which contained a beautiful cathedral and tons of shops. 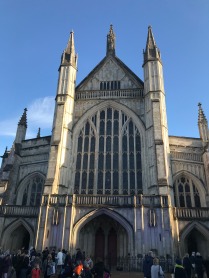 Winchester’s Christmas market was nice enough, but Gareth was adamant that it didn’t compare to what were going to experience in Cologne.  I was glad to hear this, because so far, I hadn’t been all that impressed.  Every market we had been to in England was nice, but not overwhelmingly exciting.

Tuesday we packed our bags, headed back to Heathrow and made our way to Düsseldorf.  The plan was to spend a night in Dusseldorf and then make our way to Cologne on Wednesday.  When we got to Dusseldorf, we quickly checked into our hotel and made our way to the “altstadt”, or old town, to check out our first real Christmas market.  Unfortunately,  by the time we made it to the city center, they were closing up for the night.  We walked around a bit to figure out which markets to hit up the next day before heading to the hotel for the night. 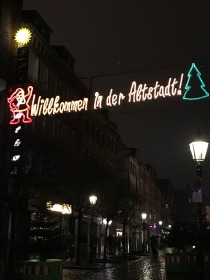 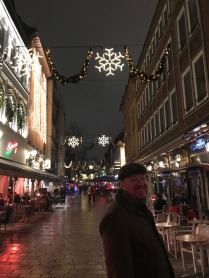 After a somewhat slow start that morning (too much Prosecco and cribbage the night before) we made our way back to the altstadt and Lee and I finally got to experience our first authentic Weihnachtmarkt.

Oh.  My.  God, you guys.  If you ever have the opportunity to go to Germany during the Christmas season, DO IT.  Everything, from the atmosphere, to the drinks to the food, is beyond amazing.  I got to try my very first glühwein, which is a hot mulled wine, available in both red and white varieties, and Lee got his fill of hot chocolate with both Bailey’s and amaretto.

We spent about half the day walking through Düsseldorf before making our way to the train station to head to Cologne.  Lee and I were pretty jazzed about the markets we had experienced in Düsseldorf, however, Charlie & Gareth continued to assured once again, that they didn’t hold a torch to Cologne.

They weren’t lying.  As our train slid into the Cologne train station, we saw a beautifully gothic, almost foreboding cathedral in the distance.  It was absolutely breathtaking.  We  made our way to the hotel, dropped our things and went to explore the city.

As luck would have it, there was a Christmas market about 50 feet from the hotel entrance, so we didn’t have to go far to find some Christmas cheer.  I was parched after a 45 minute train ride, so our first stop was at the market bar so we could get another glass of that delicious mulled wine.  Once we’d had a look around we proceeded to the next market.

One of the great things about the Cologne Christmas markets is their proximity to each other.  You don’t typically have to walk more than 5-10 minutes before finding another one.  Cologne had a total of 9 markets set up when we were there, and I believe we made it to 8.

Our evening was spent trying a bunch of new and exciting foods and drinking a lot of mulled wine and beer.  The markets close around 10, which meant that everyone made their way to the nearest bars to keep the festivities going.  We had a couple more drinks before making our way back to the hotel.  (We had a VERY spirited game of Cribbage that needed finishing)  A couple more glasses of wine and beer later, Gareth and I were still losing at Cribbage but less inclined to care.

Thursday morning, Gareth & Charlie walked us down to the Cologne lock bridge.  Like it’s Paris counterpart, the lock bridge is a place where couples place a lock with their names and anniversary date on the bridge.  The couple breaks the key off in the lock before making a wish and throwing the key into the Rhine.  Charlie and Gareth immortalized their wedding date on their last trip to Cologne and it didn’t take much convincing for Lee and I to decide to immortalize ours as well.  We even found a spot right next to Charlie and Gareth’s lock so we’ll always have a place next to each other.  Best friends for life!

Cologne cathedral in the background at the lock bridge

The rest of the day was spent hitting up Christmas Market after Christmas market and stopping for glühwein whenever we got cold.  Charlie and Gareth made reservations for us at their favorite Cologne restaurant that evening, an Alpine-themed restaurant complete with servers donning lederhosen and boots of beers.  I chose to try Wienerschnitzel that evening and made lots of Tenacious D references to people eating my fucking schnitzel that apparently only I found funny.  Whatever.  I stand by my jokes.

Friday morning we visited the markets one last time, in order to buy all of the items we had been scoping out since we arrived before making our way back to the train station.  It was a bittersweet day, as reality sunk in that we would be heading back to the US the next day.  Our Christmas vacation was nearly over and we would have to return to the real world again.  A return to the real world meant in-depth conversations and tough decisions were going to be headed our way.  We promised each other that this wouldn’t be the last time we came to Europe to experience Christmas.  If anything, this was just the beginning.

One thought on “Christmas in Europe Part 3: The Weihnachtmarkts”